Since it was introduced to audiences outside Japan, “Naruto” is one of the most popular anime tv shows in the world. The show was directed by Hayao Date, and it was written by Katsuyuki Sumisawa and Junki Takegami. It has an exceptional storyline and many memorable characters which make this show recognizable in the world of anime. Some of the best characters appearing in Naruto are female, and some of them marked the whole series. We are going to present you with the 5 best Naruto female characters on our list.

Sakura Haruno is one of the main characters in the franchise. She started as a member of Team 7, which consisted of her, Sasuke Uchiha, her love interest and a later husband, and Naruto Uzumaki, the series` main character. For a long time, she was Naruto`s love interest, and she rejected him several times. Their relationship often served as comic relief in the series. She is exceptionally good at chakra control and is one of the strongest female characters in the whole series.

Konan is a character that appeared much later in the series, compared to Sakura, but she left a big mark. She is one of the founding members of Akatsuki, a clan that served as the main antagonist of the series for a while. She is probably the strongest female in the series, alongside being calm, stoic, and level-headed. After the death of Nagato, she became the protector of Naruto Uzumaki. She is now deceased, as she died later in the series.

Tsunade debuted in the 83rd episode of Naruto. She is called “Princess” because her ancestor Hashirama Senju was the first Hokage of the village called Konohagakure. Later she became the fifth hokage of Konohagakure. She is committed to defending her village and their allies whenever necessary. She has a generally good relationship with the main character of the series, Naruto Uzumaki. However, with his immaturity, he triggers her bad sides like bluntness and short-temper.

Temari is the eldest of Three Sand Siblings, alongside Gaara and Kanukro. Both she and her brother Kankuro are afraid of their brother Gaara, due to his troubled nature and great powers, which he can’t control. Ultimately, both she and Kankuro started to believe in their brother. Kanurko and her became Gaara`s bodyguards after he became the fifth Kazekage of their village. She is presented as a stoic, blunt, and prudent character.

Hinata is a part of Naruto franchise since the first episode. In the beginning, she was a part of Team 8, alongside Kiba Inuzuka and Akamaru. She is very shy, and she addresses other people with kind and polite words. Her politeness doesn’t serve her well all the times. Naruto Uzumaki was her love interest from the start, although he didn’t notice her sympathies until much later in the series. Later, they married and they have two children. One of them is Boruto, the main character in the spin-off show called “Boruto”. 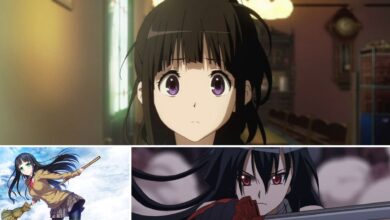