The word anime is used to describe the style of art used in animations in Japan, but other countries have their own anime too. One of those countries is China. When we talk about Chinese anime, we generally mean the animations which have been created in China or maybe are Chinese adaptation of manga or Manhua (Chinese comics). We made a list of top five Chinese anime, so take a look.

The title of this fantasy action anime translates to Monkey King: Hero Is Back. The story follows Monkey King, a legendary creature which is unrivaled in combat. In the anime, there are three realms, including Heaven, Earth, and Hell, and Monkey King was powerful enough to be able to walk among the realms freely. At one point, he was punished for breaking certain divine laws and making the Gods mad. They imprisoned him in an ice pillar and bounded with chains. After years of imprisonment, Monkey King is being released by a boy who touches the ice pillar which breaks the curse. There is an evil who wants to gain eternal life by sacrificing souls of children, and now Monkey King is pitted against that evil.

This anime is considered to be one of the best looking Chinese animations ever. The story is set in a world where mythical spiritual beings exist. One of those creatures is a girl named Chun who undergo the rites of passage, which is a must for all such beings. That includes living in and experiencing the human world. She enters the human world as a dolphin and ends up getting caught in a fishing net. A boy frees her, but he drowns. Chun feels quilty and wants to revive him at the cost of half of her lifespan.

Lan Mo’s Flower is filled with romance and magic. It is pretty short considering that each episode of the series is about 13 minutes long, and there are about nine episodes. The story follows Lan Mo and Lui Yi Feng. They are friends, but Lan Mo is in love with Lui. She wants him to love her back, so she finds a magical hairpin which enables her to change her appearance. She decides to use it to make Lui fall in love with her but is that really what she wants…

The story is set in a school and the protagonist of the anime of Jiang Hao Yi. He is an ordinary boy, whose life changes completely the day various beautiful girls start confessing their love for him. The fact that he knows none of the girls is even stranger. So what happened?

The series has been adapted from a Chinese Manhua of the same name. The protagonist of the series is Yang Jinghua who is very poor. One day he wakes up finding himself ten years younger, but soon after that a white-haired man tells him that he is dead. The unknown man asks Yang to join him for the rest of his spiritual life. 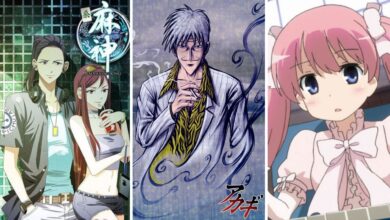 The Best Anime About Mahjong – A Popular Strategy Game