If you are thinking of building a neon sign for your home or business, it is always important to have a source of inspiration. It is a great idea to get inspiration from iconic neon signs all over the world. One great source of neon light inspiration is the city of Los Angeles.

Los Angeles is one of the most glamorous and metropolitan cities in the world. It is a city of bright lights and beautiful people. It is a city built on dreams, and it has a multitude of iconic sights. A good number of these sights are neon signs that have ingrained themselves in the public consciousness. Here are 8 Legendary neon displays in Los Angeles to help inspire your creations:

The Earl Carroll Theater was built in 1938 and is one of the last structures built during Hollywood’s Golden Age. It was designed by renowned architect Gordon B. Kauffman and was meant to be a nightclub. The building has a unique aesthetic and has helped with the growth of the Los Angeles entertainment industry.

The building is a perfect example of Kaufmann’s rectilinear style and has a unique aesthetic, that uses asymmetrical facades, machine-like designs, and a flat roof. The outside is somewhat simplistic, however, the interior is perfectly ornamented with artworks and tube lighting. A good number of these lighting designs still remain to this day.

The Clown Circus Liquor Sign is located at the corner of Burbank Boulevard and Vineland Avenue. The clown is 32 feet tall and is constructed of detailed neon. The giant clown was first created in the 1960s to advertise Circus Liquors. The clown has a very unique design, with a ruffled collar, polka dot suit, and a drum that says Circus Liquors. The neon display is considered a landmark and has even appeared in films over the years.

Los Angeles has always been renowned for its beautiful and iconic buildings. Even small shops and private institutions have gained landmark status. One such structure is the Helms Olympic Bread sign located in Venice Boulevard. It was originally an industrial bakery that provided the neighborhood with fresh bread till it was closed in 1969. The bread became a neighborhood staple, and it was even declared the official bread of the 1932 Olympic games.

The Westlake Theater is considered a historic site and is located in Westlake, Los Angeles. It was first opened on September 22, 1926, as both a vaudeville theater and for motion pictures. The building was designed by renowned architect, Richard Mortimer Bates Jr. The theater has a Mission/Spanish Colonial Revival style. It boasts a cartouche relief and Adamesque references. Although the theater has gone through various changes, its iconic neon sign still holds pride of place to this very day.

The Broadway Theater District consists of twelve movie palaces and is located along six-blocks of Broadway. It is known as one of the earliest and largest theaters in Hollywood. Due to its huge size, the district is made up of beautifully constructed theaters. The theaters are decorated with a multitude of neon signs and marquees. Although the district has been open for many years, it is still well preserved due to the efforts of several preservation groups.

Although Los Angeles is a city full of iconic neon signs, there is no place more stocked or devoted to neon art than the Museum of Neon Art. The museum is an institution that helps visitors develop a love for neon lights. The museum was originally founded by neon art enthusiasts, Lili Lakich and Richard Jenkins. Its original location was in Downtown, LA until 2011. The institution was transferred to Glendale, California in 2016. The museum does not disappoint when it comes to neon arts. Its vast collection includes neon art from Grauman’s Chinese Theater and so much more. Aside from its impressive collection, the museum also offers lessons in the traditional glass bending arts.

Los Angeles is renowned for its many entertainment districts. One of the most beloved being Universal Parks & Resorts. The Universal CityWalk was constructed as an expansion of Universal Studios Hollywood. It is used as one of the main entrances to the park and is also used as a parking lot for the theme park. The walk is built in various architectural styles and a multitude of neon signs lights the way for visitors.

Clifton’s Cafeteria is worthy of being called a national landmark. It is known as the oldest cafeteria-style restaurant in the country. It also has one of the oldest neon signs in the world. The sign was constructed in 1935, and amazingly it still functions to this very day. It has never been turned off, and it has become an iconic structure in the Los Angeles area.

LA is a city of lights and glamour, and it is difficult not to get inspired after seeing the bright neon signs strategically located all over. These neon signs are iconic, and they were created by master craftsmen at the top of their game. If you are interested in creating your own neon signs, you should have the best neon lights possible. For top-quality neon lights, visit gindestarled.com. The Ginde Star company has a wide variety of neon lights that could fulfill a wide variety of needs. By using top-quality lights and the right source of inspiration, you’ll be able to create beautiful works of neon art for your home or business. 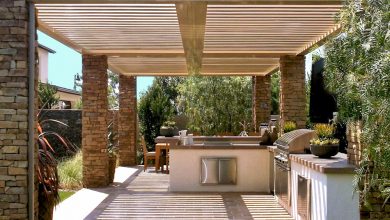 Why Do I Need to Hire a Patio Cover in Los Angeles?