Known as the “Factory of the world,” China is the second-largest economy and has continued to grow its economy steadily for the past 30 years. Shanghai is one of China’s largest cities and its financial hub. But besides economics, Shanghai has a unique culture, awe-inspiring natural and man-made landscapes, and mouth-watering cuisines, making it a highly-visited city in China.

Whether you are planning a business trip or an adventure, this article will give you important information that can help make your flight-booking process a lot easier. Pay particular attention to the tips shared at the end of this post if you are planning to book cheap flights to Shanghai from the United States, and also make sure your Chinese visa through Visaexpress.com is ready.

International Airports for Flights between the United States and Shanghai, China

Your trip can begin at several international airports from the different cities in the United States when you are traveling to Shanghai. To help you find the best flights, here is a list of airports in the US with their codes where you can find flights to Shanghai.

Shanghai has two international airport destinations. These are:

Top Airlines to Choose From

Several airlines provide flights to Shanghai from different states in the US. Apparently, that would be a long list, but here are a selected few from the major airlines:

We have handpicked some of the highly-rated airlines for your consideration. While most of these airlines offer premium services, you can still find cheap flights to Shanghai on some of them.

United Airlines is a member of Star Alliance and has codeshares with several airlines such as Lufthansa, Air Canada, and more. The airline has more than 770 aircraft in its fleet all comprising Boeing and Airbus planes.

United Airlines serves more than 200 airports across the world covering Germany, France, Belgium, China, Japan, and many other countries.

Passengers can choose from a variety of travel classes, including Economy Plus, United Polaris, Business Class, and Premium Plus. The Economy section comes with spacious seats and enough legroom. The United Polaris provides access to a cozy bed and silk pajamas, among other amenities. Passengers on the Business Class get two free checked bags in addition to a hot meal. The Premium Plus section offers free alcoholic drinks plus upgraded seats.

You can find flights to Shanghai on United Airlines starting from $3,795.

Headquartered in Fort Worth, American Airlines is one of the pioneering carriers in the world with nine different hubs in the United States. The company’s massive fleet size services over 50 countries of the world.

Travel classes for the airline come in Economy, Premium Economy, Business, and First Class. Passengers are offered non-alcoholic drinks and snacks, regardless of section. However, customers flying First Class have access to personal pods.

Flights to Shanghai on American Airlines start from $3,695 for roundtrips and an average of $2,939 for one-way flights.

Delta Air Lines has its headquarters in Atlanta, Georgia. The airline is among the oldest in the world. Delta (as it is commonly called) prefers narrow-bodied jets that are in the short-to-medium range. The airline has a fleet consisting of McDonnell Douglas, Boeing, and Airbus aircraft, with the Boeing 737 and Airbus a321 being the most commonly flown models.

Travel classes for Delta Air Lines include Economy, Premium Economy, and Business Class. Passengers on all flight sections are offered Starbucks coffee. A wider meal option and increased legroom are available for passengers flying Premium Economy. In addition to all of these, the Business Class section offers skincare products, comfy bedding, and noise-canceling headsets.

On average, the cheapest one-way flights to Shanghai on Delta Air Lines can cost around $890.

Air China is the official national carrier for the People’s Republic of China. It is one of the most prestigious airlines in the region, covering about 35 countries on nearly all the continents of the world.

All flights offer Economy and Business Class, while the First Class is available in some of the aircraft. Some of the amenities available for premium tickets include reclining beds, sliding privacy boards, and headphones, among others.

The cheapest average price for a one-way ticket for flights to Shanghai from the US is $560, while roundtrips can cost up to $1,173.

Lufthansa is a premium carrier that strives to provide maximum passenger comfort and hospitality. It is the first European airline to attain a 5-star accreditation and the second-largest airline in all of Europe. Lufthansa’s services cover more than 80 countries of the world.

Passengers can choose from Economy, Premium Economy, Business, and First Class. Each travel class offers various free checked baggage ranging from one bag of up to 50 lbs (for Economy Class) to 3 bags of up to 70 lbs (for First Class).

Prices can range from $1,381 to $4,050 for roundtrips, depending on the time of year, class of flight, and where you are flying from.

China Eastern Airlines serves over 30 different countries across Asia, Europe, and more. In addition, it serves over 150 destinations in China.

Many of the aircraft offer Economy, Business, and First Class options. Economy passengers have access to pillows and blankets, while those in Business Class can recline on seats that convert to flatbeds. First Class passengers are typically only six in modern jets, with each having full comfort in pod-style booths. Chinese tea is served alongside all meals, regardless of the class option.

You can find cheap flights to Shanghai on this airline from $661 for one-way tickets and $1,221 for roundtrips on average.

Emirates airline is a world-renown premium carrier based in the United Arab Emirates. It is the fourth-largest airline in the world serving more than 140 different airports across 70 countries around the globe. It has its major destinations in the Middle East, Europe, and Asia.

With a large fleet of planes numbering over 250 and consisting of Boeing and Airbus, Emirates has nearly all categories of passenger aircraft. The airline has in its fleet the Airbus A380-800, renowned as the largest passenger plane in the world. It can airlift up to 615 passengers and is used for long-distance trips.

Travelers can choose from three travel classes, including Economy, Business, and First Class. Free beverages, meals, and entertainment are offered in the Economy Class, while passengers flying Business and First Class have larger screens, complimentary alcoholic beverages, and additional amenities such as seats that can convert into beds.

One-way flights to Shanghai can cost an average of $1,354 and round trips can be as cheap as $1,436 or as high as $4,727 depending on availability and where you are flying from.

Aeroflot Airlines is a Russian carrier with an extensive reach covering over 140 airports spread in 52 different countries. The airline has over 250 aircraft in its fleet consisting of Boeing, Irkut, and Airbus.

Passengers booking flights to Shanghai from the US using this airline will likely fly the popular Airbus A320-200 designated for medium-range flights serving Asia and Europe.

While the economy class comes with a free checked bag, you will get a more comfortable seat with better entertainment and two free pieces of checked luggage in the comfort class. The business class gives passengers priority check-in, access to the waiting Lounge at airports, and seats that can be transformed into beds.

Depending on what part of the US you are traveling from, the cheapest one-way trips are available for around $554 on average, while roundtrips can cost up to $993.

Established in 1919, KLM is the oldest airline in the world and still operates under the same name. Apart from Australia, the airline serves every continent of the world, extending its reach to more than 65 countries. KLM’s concentration is in major international airports in England, China, France, Norway, Canada, Germany, Spain, Norway, and Italy.

The airline has a combination of Boeing and Airbus planes in its fleet, with the Boeing 777 being the most commonly operated model.

KLM flights offer Economy and Business Class. Both cabins feature ergonomic seats, with the Business Class having four extra inches of legroom plus an amenity kit.

Flight Times From the US to Shanghai and Routes

The total distance from the United States to Shanghai is approximately 7,063 miles (11,367 kilometers). Direct, nonstop flights to Shanghai from the US usually have an average total flight time of about 14 hours 38 minutes.

Your exact flight time might change dramatically, depending on several factors such as stopovers, connecting flights, wind speeds, take-off and landing, and more. If you are planning a trip, it is usually more practical to add extra time for unforeseen delays in addition to the time it takes for the plane to taxi from the gate to the runway.

Keep in mind that Shanghai is 13 hours ahead of Washington, DC, USA and even within the states there are several time differences. Remember to factor this in for the particular state you are flying from when calculating your arrival time.

Following is a list of direct, nonstop flights between different US international airports to Shanghai Pudong International Airport. These airlines and routes are your best bet if you are hoping to get to Shanghai, China in record time.

Here are a few one-stop flights with their waiting times:

Flight prices do often change without prior notice. The prices mentioned in this post are subject to change and availability. It is usually best to find out the current available price from your preferred airline’s website when booking a flight. This will help you budget more accurately.

There is nothing to be ashamed of if you are looking to cut costs while booking flights to Shanghai. No one wants to throw away money, especially if it can be avoided. Paying for air tickets between countries is not particularly inexpensive, so it is a smart move to actively look for highly affordable fares if you are planning such a long trip.

Here are a few tips that can help you find cheap flights to Shanghai. 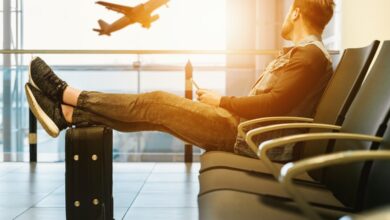 Things To Do In An Airport?